Posted by robbneumann on Wednesday, 26 October 2016 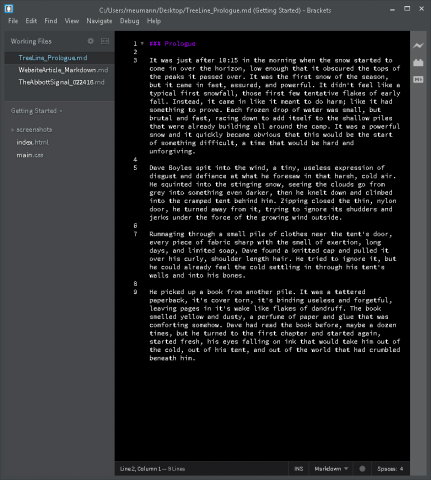 Okay, so we've already talked about why Plain Text files and Markdown is the way to go. I rambled on and on about the different gadgets I like to use when I'm writing. It's time to get into some specifics regarding the software I use, and if we're going to travel down that particular rabbit hole, we're going to have to talk about text editors.

First, what is a text editor? Most of us are used to the concept of a word processor. Microsoft Word and Apple Pages are word processors, meaning their purpose is to take text and apply just enough extra sauce to it that it's pretty. That's a gross oversimplification, of course, but it's pretty accurate. Type quotes around a sentence in Word, for example, and watch as Word changes your quotes into those more elaborate, mirror image quotes ("smart quotes" in MS Word vernacular). Start a new line with a dash and see how it gets converted to a bullet point list instead. That's all the work of a word processor: a program designed to make what you type look really good.

A text editor, on the other hand, is a tool for generating and manipulating raw text. Text editors don't make what you type look good, but they do a great job of being powerful little engines of text creation. They're often very small programs (most are under 20-40 MBs in size compared to the 3 GBs often needed to install Microsoft Office). They usually have really powerful find/replace tools, are astonishingly stable, and are also built for customization. They are often exceedingly boring and ugly to look at, but they get the job done, and another great feature of text editors is that they are perfect for creating and reading plain text files and Markdown.

I probably haven't convinced you to switch from Word, have I? It's okay. You can use and love Word. Lots of people do, but as I mentioned in my first article, I've really come to love the simplicity of writing raw, unformatted (mostly) text. That's why, for me anyway, a text editor is a fantastic tool.

If you want to venture into the wilds of text editors, this is what I would recommend you start with:

Adobe Brackets (Windows/Mac): My new favorite text editor is Adobe Brackets. It's simple, free, and cross-platform, so I can use it on my Windows machine at work and have the same workspace and tools when I come home and fire up my Mac.

Like the best text editors, Brackets can be customized and tweaked to better suit your workflow and needs. It even has a Markdown Extension so you can preview your Markdown styled text from inside the app by clicking a little button. Where Brackets stumbles is it's lack of a spell check. That has to be added manually as another extension. You might consider this a strength (I get to use it the way I want!), but it's my biggest issue with this otherwise great, completely free text editor.

Did you see the screenshot of Brackets? The theme, which outlines the colors and font style and size, can be changed very easily. Also, every little detail you can see or want to see can be changes. So, if you don't like the sidebar on the left that shows you which files you have open, you can remove it (Ctrl+Alt+H or View -> Hide Sidebar). Don't like that Brackets numbers your lines/paragraphs? You can remove that too (View -> Line Numbers). Brackets even has a neat "No Distractions" mode (Ctrl+Shift+2 or View -> No Distractions) which removes the Sidebar and any tool icons you have on the right-hand side. It's really up to you how you want to work and what you want it to look like while you're using it.

These kinds of adjustments and fine-tuning aren't limited to Brackets. Almost any Text Editor you try will have these kinds of settings.

If you don't like Brackets there are a ton of other, pretty great text editors out there. I'd recommend Notepad++ if you're a Window's user and TextWrangler if you're on a Mac. There are also a number of neat, cheap "distraction free" apps you can purchase or download, which are essentially just text editors without any of the clutter like line numbers or color-coding. The thing no one seems to mention, however, is that you can customize your workspace with any decent text editor. So, it'll take a few clicks, but something like Brackets can be every bit as distraction-free any anything else you can download or purchase.

Editorial (iOS): Most of Leech and my still unpublished 2015 NaNoWriMo effort were composed or collated using Editorial. It's a little pricy for an iOS app, but like Brackets it's fast, powerful, and built for customization. You can download a number of amazing Workflows for Editorial, or if you're feeling particularly nerdy, design your own.

So, what are Workflows? They're essentially Macro-like tools for automating your text manipulation tasks, allowing you to quickly accomplish tasks that would normally be long and tedious or just annoying. For example, I have installed a Workflow in my copy of Editorial that preserves line breaks in Markdown formatted text, so when I convert to HTML (another Workflow!), my paragraph formatting doesn't get lost in the shuffle. I have another Workflow that turns anything I type in Editorial into an email so I can shoot rough-drafts to alpha readers. Yet another Workflow takes any word my cursor is on and looks it up in a completely unrelated dictionary app I like, and so on. Workflows are text super-powers and Editorial uses them to turn a good text editor into a tool that does everything I need and more.

Editorial is so good that I often hook up my iPad to my computer monitor and use it as a "desktop" app. And, because Editorial can be synced to Dropbox, everything you do in it is uploaded to the cloud, making your files accessible on any other device. And, yes, you can write in Editorial on your iPad or iPhone, then use that file in Brackets when you get in front of a computer with no need to modify or alter the file formatting or play that "Save As..." game. It all just works.

Scrivener (Windows/Mac/iOS): So, what about the crowd favorite Scrivener? It seems that you can't read any "software for writers" article without seeing some mention of Scrivener, so it seems like an obvious recommendation, but the truth is I haven't spent a lot of time with it. I picked up a copy on sale a while back and recently bought the new iOS version, but I'm still trying to get my brain wrapped around it. What little I have done with it is pretty neat, but I'm a pretty organized writer in general, so it's organization tools aren't quite as amazing as other, breathless reviews might lead you to believe.

If you have thoughts about Scrivener, I'd love to hear them! Or, if you have any questions about Brackets, Editorial, or text editors in general, I'd be happy to answer them. Just let me know in the comments!