Posted by robbneumann on Wednesday, 6 April 2016 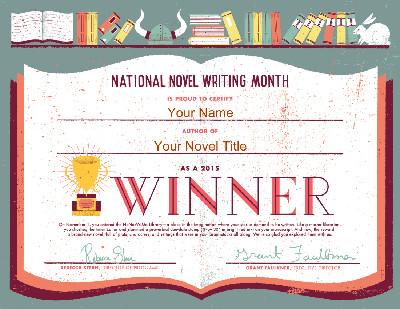 I haven't spent much time sharing my thoughts here on my website in the past few months, so I thought I'd come back and talk a little about my experience participating in National Novel Writing Month in 2015.

The experience of writing 50,000 words in one month was interesting. As I've said on here several times, Leech came about thanks to a modified NaNoWriMo challenge when my writing buddy Terry Taylor Hobbs and I worked towards a daily goal of 1,000 words. For Leech, it took me three months of these 1,000 words/day sprints to finish the story, which combined with off-months, made it take almost six full months to complete, not including time spent editing and formatting.

Getting 1,000 words written every day was a challenge, especially on days when time was tight (we moved into our new house during one of those months!), but it wasn't nearly as much of a challenge as needing 1,667 words per day when I was shooting for 50,000. Those added 600-700 words increased the daily challenge substantially and I found myself writing with a lot less care. I was often writing for words, sometimes just for words, and so I think what I wrote wasn't as polished or purposeful as what I wrote in the previous year.

In some ways, that was freeing. It wasn't easy, but turning off my internal editor let me just write, which was a lot of fun at times. It was interesting to sit down and just hammer out a series of words to achieve that goal and I managed a few days when I was able to exceed my daily goals by a large margin, an added achievement that really felt great.

On the flip side, turning off that internal, ever-watching editor left me with a pretty disjointed, sometimes confusing story. With Leech, the first thing I did every day when I sat down to write was reread what I wrote the day before, doing some light editing as I went, and then I started working on my daily goal. I seemed to have a little more time, so I could be more careful, which helped with a consistency of voice, a more cohesive story structure, and better pacing. My first draft of Leech had problems, no book is ready in its first draft state, but what I had at the end of November 2015 was (and still is) a mess.

Weirdly, NaNoWriMo 2015 also ruined me for writing. When I finished with Leech I couldn't wait to start a new project and I began work on a co-written book with Terry Taylor Hobbs the next month. I started a couple of projects after my NaNoWriMo book this year and nothing has stuck. I'm burnt out. Some of that might have to do with the fact that I launched a new webpage for work in November, while also furiously working on Revolution (that's a work-in-progress title), but I was effectively finished with writing when it was all over (hence my not even bothering to fill out my certificate information!).

I need to get back to my NaNoWriMo 2015 project and see if what I have is actually a book, but I’m giving it a little time. I’ve done some editing, but it’s going to need a lot of work before it’s ready to put out there for other people. So, in the meantime, I’m experimenting with some other ideas and hoping one of them will stick.

The question I'm asking myself now is whether or not it was worth it. Did the challenge of 50,000 words in one month help and inspire me? Or, did it break me? For now, I'm thinking it might be too ambitious for me, but maybe I'll feel differently when I get back to my book. I'm glad I did it. I'm not sure yet if I'll do the full 50K challenge again.