Posted by robbneumann on Saturday, 17 September 2016 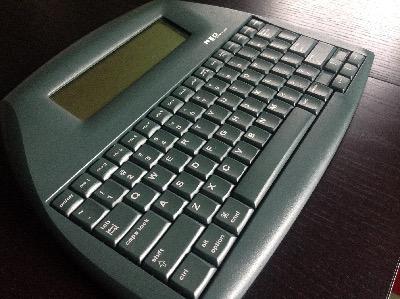 I've just gone on and on about file formats and code without talking about how I physically draft my books. These are the tools I use and a little explanation as to why.

Alphasmart Neo: For actual writing, an Alphasmart can't be beat. It's essentially a USB keyboard with a small LCD screen. You can write on it for weeks or months at a time and the battery gauge will never budge. When you want to get your writing off of it you just hook it up to a computer with a USB cable and push the "Send" button. It takes a little while, but the Alphasmart will retype anything you've written into whatever document you have open on your computer and will also function as a keyboard if you want to add a little more.

If you haven't used one, the next obvious question is... why? Why use an Alphasmart when laptops are just as easy to carry around and are infinitely more flexible? The answer to that is more psychological. If you're the kind of person who can ignore the continual chimes of new emails coming in or Twitter notifications popping up, go ahead and use a laptop. Me? I get distracted easily, so an Alphasmart forces me to concentrate on what I'm doing. I can't jump online to make sure I'm getting a street name right or to figure out who won Superbowl XVI. All I can do is write. Numerous other writers have talked at length about this strength, so I'll just say that I agree with what they've said.

I started with an Alphasmart 3000 while I was drafting Leech and then replaced it with the Neo during last year's NaNoWriMo. The Neo has double of the memory of the 3000, a slightly better keyboard, and will let you view more (or less) text on your screen depending on your eyes and preferences. It's a nice upgrade, but the 3000 is fantastic if you can get your hands on one. Both machines are pretty cheap on eBay if you're interested, with the 3000 available for about half the price of the Neo the last time I looked.

iPad: The iPad gets a lot of flack as being a "content consumption device," but Leech was actually created on my trusty, aging iPad 3, with a little help from my previously mentioned Alphasmart 3000. I had been carrying some form of laptop with me everywhere I went since the mid 90s, but since it's introduction in 2010 the iPad has become my primary computer. Not only is it light and extremely portable, but I've found some apps that have become indispensable for me. I've even started using my iPad more at home, over my desktop computer, because of some of the apps that have wormed their way into my daily workflow.

Logitech Keys-To-Go: Another thing that the iPad gets a lot of criticism for is the lack of a keyboard. I feel like this criticism is a little unfair, because the iPad isn't a laptop. Plus, you can add any bluetooth keyboard to it and have the kind of keyboard experience you need for serious work. Even Microsoft's Surface, which bills itself as a laptop/tablet hybrid, doesn't come with the keyboard it is continually advertised with in all of its commercials. You have to buy it separately.

I got an Apple Wireless Keyboard for my original iPad and used it for a long, long time, but a couple of years ago I got a Logitech Keys-To-Go keyboard and never looked back. It's small, thin, and light, so much so that I always carry it with me just in case. It takes a little while to get used to the feel of the keyboard, but if a tablet is appealling to you for it's portability, this keyboard should be on your shortlist.

Dropbox: Apple has sacrificed system-wide file access for security in their mobile operating system. This is either a good or bad thing, depending on your stance on that debate, but if you find yourself struggling with their sandboxed hierarchy for file access chances are pretty good that Dropbox will fix the issues you're fighting against. Apple has their own own cloud service (iCloud), but I was an early user of Dropbox and haven't run across a compelling reason to switch. Dropbox is free for a small, consumer-level account, and is more than enough if you're loading it up with plain text files.

Good Headphones: For a guy that just complained about how easy it is to get distracted, I do like to have music going while I work. At home I usually have on a pair of Grado SR60s or SR225s. They're comfortable for long periods and sound truly fantastic, especially for the price. I've had the same pair of Grado SR60s for almost 20 years now and they're one of my favorite, all-time best purchases. I can't recommend them enough. That said they do look like I should be working the sonar station on a WWII submarine, so if you're concerned about aesthetics they might not be your thing. And, if you plan to do a lot of writing out and about, like at a coffeeshop, Grados are "open" meaning that everyone will be able to hear how much you like Carly Rae Jepsen. If I'm out in the world trying to write or commuting to work, I like my Thinksound MS01s or Sennheiser HD-439s. Both offer pretty great sound without venturing too far into completely insane price points. For some of you paying anything over $20 for headphones might already be a little bit insane, but $100 is considered entry-level for a lot of headphone enthusiasts. The headphones I've listed are a little expensive, but have great build quality, excellent sound, and should last you a really long time if you take good care of them.

iPod Shuffle: Any MP3 or phone is going to be great if you want to listen to music while you write, but the iPod Shuffle is the Alphasmart of audio for me. I plug-in, press "play," and I'm done with it. I can't sit and play DJ for my writing session. I can't build new playlists when I should be writing. I can't check my email or see what's going on in my Twitter feed. It's a distraction-free music player, so it's perfect for someone like me. I have two Shuffles, both of which are loaded with mostly instrumental, electronic music (mostly minimal house and ambient). They are small, have pretty good battery life, and are relatively cheap (most of my headphones cost more than my Shuffles -- something I find endlessly amusing for some reason).

Notecards: I have a theory that most writers get started as writers just because of an embarrassing office supply fetish. It's okay to admit it. We're all friends here. I myself covet various notebooks and pens, but notecards are the alpha and omega of my particular insanity. They're great for plotting, for world building, and for jotting down random thoughts. I carry them with me almost everywhere I go and smile through the teasing I get for it from my family.